You are here: Home » Reviews » What to Read » Six of Crows Review and Meet Leigh Bardugo

UPDATED WITH PHOTOS AT THE END!

A while back, a friend of mine started posting updates on social media that made references to “Grisha” and “Ravka” and I had no idea what the heck a “Heartrender” was that she was talking about, let alone a “Etherealki.”

She had plenty of comments in response so clearly I was the one in the dark about this other world she spoke of. Scratching my head, I turned to the Google to find out what I was missing – because I wasn’t going to admit to her that I wasn’t cool enough to be in on the joke.

Come to find out… this crazy language she used was from a BOOK. You know, those things I used to devour before I had the Cupcake? Right… I remember those.

Off to the library in hunt for this mysterious young adult novel which I had pieced together was the first in the Grisha series, Shadow and Bone by Leigh Bardugo. I quickly fell  in love with the Tsarist Russia-inspired fantasy world as told from the perspective of a young Alina Starkov. Starkov unexpectedly discovers her dormant power that when controlled, has the potential to change the course of history for her beloved and war-ravaged country — I mean really, who can’t identify with that? I read it nearly straight through. I wasn’t alone, the series — with no surprise — has been on the New York Time and USA Today bestselling lists.

Couple days later, I picked up the next one, Siege and Storm. Blew through that, enchanted even more so by the many orders of “Small Science” practioners and their quest to reunite their once-great nation from the Shadow Fold where nearly impenetrable darkness exists and patrolled by flying predators – that naturally can see where our beloved characters cannot. By this time, my mind was so engaged with the plot that it was working overtime while I slept, entering my dreams to anticipate the next piece of the story and distance myself from the flesh-eating flying monsters.

I hadn’t had this much fun reading (or read this much) since I fell in love with Harry Potter!

I debated putting off reading the third in the series, Ruin and Rising, just so I’d have something to look forward to, but I couldn’t wait. That Bardugo has a way with cliff hanger endings, so I dove into the third and final delicious book in the Grisha series and I don’t dare tell you how it ends badly for the — yep, still not going to tell you.

It was a wonderful ride, but it left me with a thirst for more. And an odd desire to wear a silk robe all day.

Thankfully, Bardugo does not disappoint. Even though the trilogy was complete, her Grishaverse still had plenty of stories left untold.

And now, she gives us Six of Crows. Set in the same romantically mysterious dark world as the previous books, this new cast of characters led by a teenage hobbling thief named Kaz Brekker, aka “Dirtyhands,” and his motley crew of outcasts take us on their wild mission to kidnap the inventor of a dangerous and highly addictive drug, jurda parem. When this new form of jurda is taken by the Grisha, their powers are amplified – and uncontrollable. (Just like coffee for me in the morning.) His gang, the Crow Club, is an Oceans Elevenesque collection of seemingly incompatible flawed personalities united in a curious test of teamwork and creativity. The chapters unfold from each of the Crow’s unique perspectives (not unlike Girl on the Train) taking you even deeper into their psyche relating current fears to past experiences. You’ll fall into the pages, rooting for them all: Inej the Wraith, known for her cat-like ability to be visibly invisible and adept at climbing to areas no human should go, Jesper the gambler who is highly leveraged yet has nothing to lose, Nina the Grisha Heartrender who utilizes her gifts to her advantage, the Grisha hunter Matthias who is in love with Nina and despises himself for it, and Wylan Van Eck, a runaway rich kid who likes to blow things up.

Nothing can go wrong with that psychologically stable crew, right?!

Wonderfully spun and engaging to read, Bardugo’s infinite and deliberate imaginary tale will woo you over as well – no matter if you’re a teen or an adult. I’m ever so in awe of her masterful storytelling, it’s no wonder her loyal following spans the globe.

If you’d like to meet Leigh Bardugo, she is kicking off her 25 city international book launch and tour for Six of Crows this evening at 7 p.m. at the Irving Library. The party will be complete with themed bracelets, tattoos (temporary), treats, photo booth and book signing. You’ll even have the opportunity to get the book before it goes on sale the next day!

If you can’t make the Irving kick-off, do try and find her other city stops for the Magic and Mayhem Tour listed here. Or, you can follow Leigh Bardugo on Twitter, and Instagram. Or, read about her in Vanity Fair here.

Yeah, so this launch was pretty freakin’ amazing! Hand-cut city scape silhouettes of Ketterdam covered every wall, twinkling lights covered the ceiling, there were themed ice cream sandwiches, branded water bottles, leather stamping bracelet stations, buttons, book embossing, incredibly detailed temporary tattoos and the ever-smiling Bardugo on hand. Check out my Flickr album below! (If you click on the image, it will take you to about 2 dozen images on Flickr.) 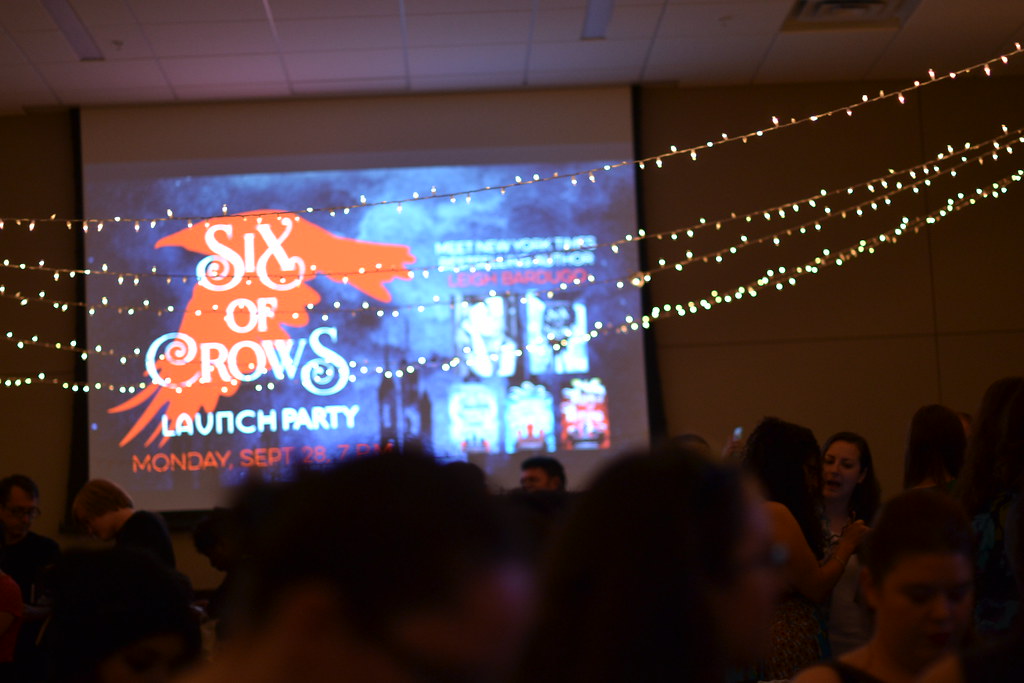