You are here: Home » In the Kitchen » Cakes and Desserts » Alvin and the Chipmunks Birthday Party

Alvin and the Chipmunks Birthday Party 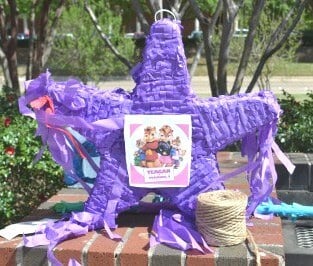 For an entire year… scratch that. Since BEFORE her 4th birthday party, (which we celebrated with a Princess and Knights Birthday Party), the Princess Cupcake pronounced that for her 5th we would be celebrating with an Alvin and the Chipmunks Birthday Party. Oh.. and let’s not forget the Chipettes, of course. She was a little obsessed with the Alvin and the Chipmunk movies at the time..

Planning an Alvin and the Chipmunks Birthday Party

At 400 days away, I thought I’d have plenty of time to figure out what an Alvin and the Chipmunks party entailed from a party-planning perspective, and let me tell you after the Princess and Knights Party we were planning at the time, I was looking forward to something that I could just pick up at the store. I was confident there’d be aisles and aisles of Party City dedicated to all things Chipmunk. I learned somewhere around 300 days away that I was very misguided. There was no Alvin and the Chipmunks or Chipettes party stuff just waiting to be purchased, and no hope of it coming out anytime soon since the next movie release was not for eons.  Still, I held out hope that I might persuade her into another theme as we got closer. I should know better.

In January I started to get nervous. She was more determined than ever to have Alvin and the Chipmunks, AND the Chippettes, as her theme. She was locked, loaded and talking it up nearly every day. And – she wanted it at the park again.

Sigh. It’s always a roll of the dice for an outdoor party in April, and there’s the logistics of dragging everything over there, the obsessive praying for no rain. For lack of a better alternative, I booked it.

Still struggling to pull a theme together, I finally found a children’s DJ (Awesome Parties and Events – I highly recommend) and went for a rock and roll concert vibe. Afte rall, the Chipmunks are legit rockstars. I also found this cute shirt for her to wear.

In retrospect, this party turned out better than I anticipated. The weather was picture-perfect, it was a dreamy spring not a cloud in the sky kind of day. We set DJ Bernadette up under the pavilion and moved all the tables to the perimeter to make a shaded dance floor and all the kids got a play microphone when they arrived.

I made  buckets with glitter paint, my Cricut and some sparkly vinyl, and just hot glued some beads to the rim.

Rocking with Alvin and the Chipmunks

For an hour and a half, the DJ played the Chipmunk tracks from all 3 movies, as well as sanitized versions of top 40. The kids had a blast dancing (the boys even more so than the girls!), so did the moms. DJ Bernadette had an arsenal of interactive games throughout the party so that every kid won a prize. And even better – I didn’t have to do a thing to entertain them all.  Oh yeah, and I – ahem – won the hula hoop contest. Word.

In keeping with the concert theme, the “concessions” menu included:

And of course, that single item without which no birthday party can be complete  – the cake.

And yes, the cake was motorized (too much Cake Boss for me). The disco ball was spinning on top, tee hee.

After our little solid gold dancers carbo-loaded, we fulfilled another of the Cupcake’s requests, and that was to have a piñata.

I know what my Ohio friends are thinking and, no. We are not Mexican. But we are Texan and it seems that piñatas are becoming traditional for at home parties here. The Cupcake wanted one. It’s her birthday, she’s Texan, so she got a piñata. A purple rock star piñata that I stuck her invitation on in a last ditch effort to put weave chipmunks into the theme. If you’d like to have a party like ours, I have two party supply kits on eBay to get you started. One is specific to Alvin and the Chipmunks, the other is Rock Star themed.

And in case you’re curious, the Princess Cupcake has indeed already determined the theme for her 6th — and 7th — birthday parties. Stay tuned…